For my international viewers, I will briefly give the introduction of Naushad, before I tell you this humorous story of his life. He himself had told this in one of the interviews.

Naushad is one of the most well-known music composer of Indian popular music, and one of the pioneer music composers of Indian Cinema in early 40’s. According to today’s standard, his music would be considered old fashioned;but during 40’s he was the pioneer, who brought western style orchestra, and and new music styles to India. Most Indian films (called Bollywood films) still come in the category of ‘Musical’ because most films have at least 10-12 songs. Most music albums become popular, because they have ‘a stamp of Cinema’. Naushad has given score in over 60 films and has given hundreds of very popular song between 1940 and 2005. He died in 2006.

I have made musical remix of couple of his very popular songs, and posted on my blogs and Youtube. They have become very popular too. 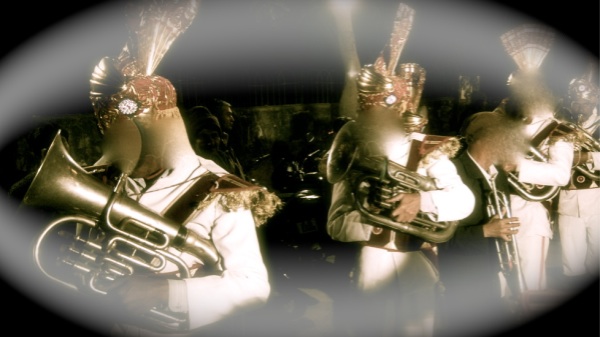 Naushad came to Mumbai, the capital of Indian cinema, to try his luck as a music composer and an actor, from a small town in north India during late 30’s.  Indian cinema (and film music) was still in a cradle. He did not know people in the film industry, so he had to struggle a lot before he got his break. But during 40’s and early 50’s, he was the most popular music composer. In the days when broadcasting was limited, and many could not afford gramophones or records, his songs were hummed in most households of India. The bands in music processions and ceremonies were very instrumental (ha ha) in making the songs popular.

During days of arranged marriages, parents decided who their children would marry to.

After Naushad became very successful and popular as a music composer, his father decided to arrange his marriage. He received an offer from a prominent family. When the future father-in-law asked what the boy was doing in Mumbai, Naushad’s father said, “He works in an office” He lied, because being in film industry was a taboo those days in many conservative families, and musicians and poets (Naushad was both!) were not regarded as financially stable. So chances of the the marriage were slim, if the truth was told!

A band was hired for the wedding ceremony and the wedding procession. It was no surprise the band was playing all the songs composed by Naushad!