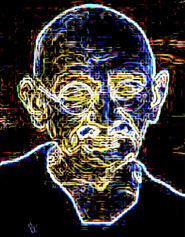 Narsinh Mehta, also known as Narsi Mehta or Narsi Bhagat, was a 15th-century poet-saint of Gujarat, India, notable as a bhakta, an exponent of Vaishnava poetry. He is especially revered in Gujarati literature, where he is acclaimed as its Adi Kavi.  He was the first person to raised issue of equal rights and caste discrimination. He often went to untouchable community area and did prayers. HIs poems have deep philosophy and humanity. Vaishnavjan To Tene Kahiye, a Gujarati Language poem describes true qualities of a devotee.  This poem was close to Gandhi’s heart. If you have seen ‘Gandhi’ film produced in Hollywood, the movie begins with this poem.

I have translated this Gujarati poem in Hindi language. ‘Vaishnavjan To Usko Kahe.’