Happy Thanksgiving (You Light Up My Life) Instrumental – Oasis Thacker 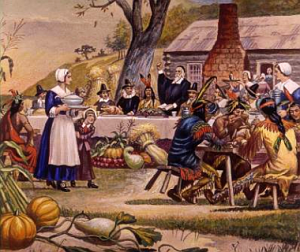 Thanksgiving is a religious holiday celebrated in America. It is more like a social holiday, when traditionally family members get together and have a turkey dinner.

Most population in the word in many countries is made up of natives and of people migrated from other countries. Some people left their homelands to find a better standard of living, or to escape from religious or other type of discrimination. They were either welcome by the natives, or they forcefully occupied the land from natives, or combination of both.

Some native Americans, also called Indians of Americas, welcomed some Europeans who had just arrived in ships, and had no place to sleep, and no food to eat. In 1621, a boat, Mayflower,  full of immigrant settlers came ashore north-east USA, now called Rhode Island, or New England area. The settlers, also referred as pilgrims, were greeted by native Indians and gave them a feast of Turkey and corn Turkey is a large bird similar to chicken.

Thanksgiving is also the day [comes on the fourth Thursday of November] when Christmas holidays begin in United States and Canada.