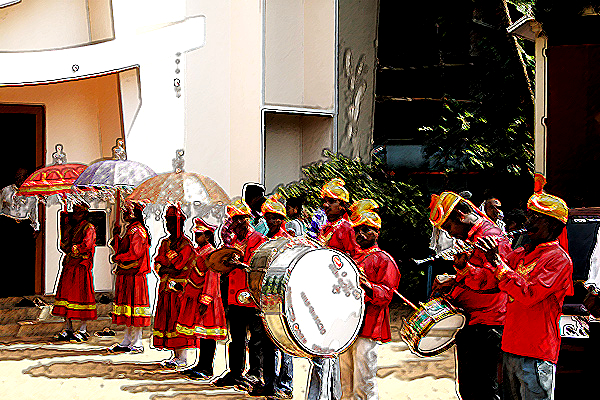 Weddings (Ceremony) are celebrated all over the world. In the western countries, weddings are quiet. The celebration in the middle class includes gathering of few close friends and relatives. A quiet (!) ceremony in a church; in which the bride wears white (!) dress. And the whole event lasts for around one hour. Sometimes there are parties in halls (not in open) after or before the ceremony. A sit-down meal is not the main attraction (only snacks and drinks are served), the alcoholic drink is. And, before it gets too noisy, most are drunk, so they go to sleep.

But in India, it is the most popular social event. (Some say it is a cricket match. Some bridegrooms like to delay wedding ceremony for watching a big cricket match). There is one thing is common between weddings and cricket. There is often match fixing!

Indians like noise. They are not disturbed by any kind of noise. There is maximum number of religious and social holidays in India in the world. And many are associated with noise and traffic jam. Wedding ceremonies last for few days to at least one whole day in modern times. At least couple of sit-down meals is served by either bride’s father, or by both the sides to a large number of relatives and friends.

And yes, noise is a must. Both the families install loudspeakers outside their decorated front yard, and popular music play for 18 hours a day.

In old days almost all the weddings had a wedding procession, with the groom riding on a decorated horse, or in a convertible car. A crowd of 100 to 500 will pass on main roads (blocking traffic). This is acceptable in India. All processions were lead by either western style marching bands playing the tunes of popular music. Those who could not afford expensive marching bands, had a smaller version with mostly drums, or Indian drums, who played limited rhythms, but kept the excitement alive.

The bands hired by well-to-do families were good. They had 20-25 pc horns and couple of clarinets, accompanied by couple of bass drums, snare drums and symbols. These were trained musicians. They read western style music notations of popular Hindi film songs.  The main clarinet player was also the bandmaster. He played the major part of main melody of the song, while the horn-orchestra supported him with the music fillers. It definitely created very festive atmosphere, providing live entertainment to not only the people associated with the wedding, but the bystanders. Somehow, the horns and band-drums were not very popular in sophisticated live music shows in halls. First, in old days, there were very few live music shows. And most shows had only 4 to 5 traditional instrument and Tablas rhythms. Harmonium (soft sounding mini organ) was the most popular instrument for singers. Then there were a Sitar, violin, flute etc.  Very few of those who did western style music would include a bongo/conga player and accordions. The only band instrument that showed up occasionally was saxophone.
Therefore we could experience big-band music only by wedding bands After 90’s the traditions have changed though. The educated grooms don’t seem to like a public processions (looking like a fool in public?) with big bands. The blue collar class now have a different type of band. A sophisticated electronic keyboard in a push-cart has replaced all the horns  and woodwinds. Usually the keyboard players are also singers. There is a rhythm section made of 4-5 bass drums and snare drums players. The educated class sometimes hires a live singing group, who sing songs while the ceremony is in progress. Electronic keyboard player, Shehnai players, etc accompany the singers.

When I was a kid in a small village during the first 11 years of my life, I hardly saw big bands, unless I visited relatives in the cities. In the village, musicians of traditional Dhol and Shehnai mostly provided excitement. They knew only couple of rhythms, and the Shehnai music consisted of few unorganized notes that accompanied. There was a small group that had a bass drum a snare drum. They also knew a couple of rhythms. But I loved the sound of bass drums. Sometimes I used to lie in a wooden bed with one of my ears  attached to bed. When I hit on the bed with my hand, it created bass drum sound in my ear! In high school I joined the school band that had a bass drum, a snare drums, a bugle and a flute. As much as I was natural with rhythm, the band teacher asked me to play bass drum or a snare drum. But the limited rhythm we had to play for school events, I could play the bass drum and a snare drum without any training. So I chose to play flute instead, to get free music lesson, and play the national anthem. After knowing do-re-mi, I taught myself couple of popular songs on the flute. Finally, I bought a drum-set in USA in 1977, and fulfilled my passion to play the big band drums. In 1995, when I bought my keyboard synthesizer, I was really excited to find many horns and reeds instrument that sounded just like real! So now I was my one-man big band. I created some new brass and reed instruments also, which you will hear in this song.

This is a wedding song from 50’s film ‘Aah’, which was very popular amongst the band groups those days (appropriately so.) I wanted to recreate the big band era of Indian weddings from my yesteryears, and also give tribute to those musicians who entertained me when I was a kid. In this song, I have only used the band instruments, the way the wedding bands used to do.

On a lighter note: They say, the big bands had its origin for giving the soldiers moral support before the war. In India the wedding bands did the same thing. When the honeymoon is over, the war begins!