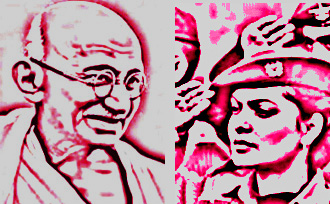 It may take a minute for the song to begin playing after clicking on the following links. If it does not, refresh the page.

Hindi Language Translation of the above poem

When Gandhi was assassinated, I was two years old. Obviously I don’t remember it. But I am sure it must have been a big shock even in a small village like mine. My father was a devout Gandhian, so it was a very sad day especially for the family.

Four years later, my village had the first official elementary school. (Lucky for me, that was the year for my first grade.)  This school was sponsored by Gujarat Vidyapith (Gandhi’s university), so obviously there was extreme Gandhian and patriotic atmosphere in the school. (Only five years had passed since the independence) There was even some high school facility, limited to Gandhian Curriculum.) Four national  holidays were celebrated with utmost enthusiasm. Gandhi’s Birthday and Death Anniversary, India’s Independence Day and The Republic Day. The days were full of activities Kids and teachers paraded in the village, singing Gandhian  and patriotic songs; and there were many other Gandhian activities like using spinning wheels, etc.

I was elected as a Magazine Secretary and the editor of our annual yearbook during the school year 1968-69, when I was in engineering college. 1969 was the centenary of Gandhi’s birth year. We dedicated the yearbook to Gandhi.

‘Vaishnav Jan To Tene Kahiye’ was Gandhi’s favorite spiritual poem written by Gujarati language pioneer poet Narsinh Mehta. I have made a new type of instrumental music arrangement based on its original folk tune.

‘Aye Mere Vatan Ke Logo (O! My Fellow Countrymen) is a patriotic song released in 1963 remembering the soldiers who died for the country. This song was written by famous patriotic poet Pradip and composed by great music composer C. Ramchandra. Legendary singer Lata Mangeshkar sang this song in presence of Prime Minister Jawaharalal Nehu and a large audience. Nehru cried during the performance.

I have tried to bring the same emotions as the great singer did in my instrumental remix. I hope you like it.